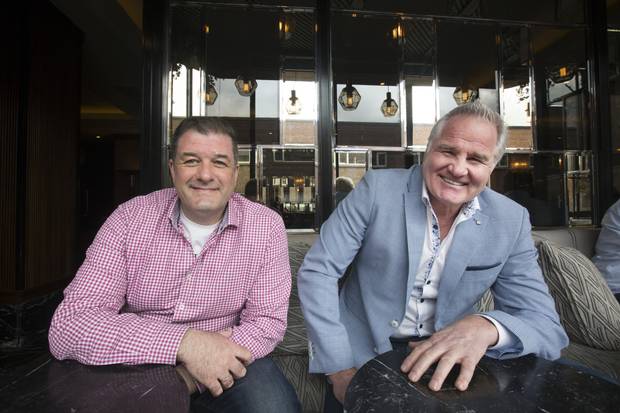 I felt they would always leave me

Brent Pope has struggled with panic attacks since he was 13. He talks to Barry Egan about dealing with depression and his self-sabotage in romantic relationships
2Brent Pope. Photo: Fergal Philips 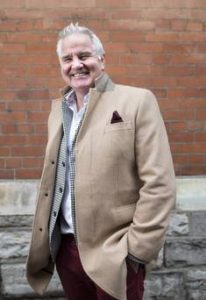 Brent Pope’s body always served him well. His mind didn’t. He had his first panic attack when he was 13 years of age. He was in the bath on a Sunday night at home in Ashburton, a rural township south of Christchurch, New Zealand, when he started shaking and couldn’t, he felt, breathe properly. “Cowering with fear,” and “crying like a scared little boy”, Brent sat in the bath until the water went cold.

He has had panic attacks, on and off, ever since. When he was 15, Brent bought a book: When Will I Be Happy? He found it the other day at his house in Dublin. Brent thought it was “sad” that he was reading books like that in his mid teens. “I had always been a very anxious person. I think you could probably say that my father was probably anxious before me,” he says.
In 1989, Brent – who was born October 27, 1962 – rang the Samaritans’ helpline at three in the morning. He didn’t know who else to turn to. He knew he was in the grip of something that wasn’t good. “I couldn’t see a way forward,” says Brent, who played for Otago at New Zealand first division level, helping them to win the division national title in 1991. “I had huge black areas in my mind. I was depressed. I couldn’t get any help,” he says. “I was terrified. I was scared.”

Brent felt that the man who answered the phone at the Samaritans that fateful night understood him. “He just said – and the words resonate with me now – ‘what’s wrong, friend?'”
“He called me a friend, and that nearly brought me to tears. It is very emotional now because this guy wasn’t my friend. He had a gentle way of speaking.” They stayed on the phone for about “two or three hours”.

The next day Brent cleaned up his apartment; and himself. “I wasn’t washing, I wasn’t shaving, I wasn’t exercising. I had taken up smoking.” It was like Brent was willing himself to throw in the towel. Talking to his ‘friend’ in the Samaritans perhaps saved Brent from himself in some way. Brent had previously felt that having a mental health issue – anxiety or depression – meant that he would be judged, that he would be seen as being a weak man because he had grown up in a stereotypical tough man’s country, New Zealand of the 1960s.
He says he felt shame. “I use the word ‘shame’ and I don’t use it lightly. I was ashamed that I couldn’t handle these things. I would cut myself away, isolate myself from friends and family and tried to find help in back alleys in the sense of: ‘Who can I go to see, where no one will see me go in?'”
“Even as much as a year ago,” Brent adds, “I was seeing a therapist in town [Dublin city] and I was so paranoid about the girls working in a travel shop next door seeing me coming in.”

This charismatic bear of a man, six foot four in height, is open about his feelings in a way that men rarely are. It is refreshing to be around him, and his emotional candour. “When I am suffering a panic attack or a bout of depression,” he says. “I do try to turn the positive spin on and say: ‘Brent, this is realistically not going to happen’. I will write down things. ‘Am I going to end up homeless? No, probably not. If I lose a job? I’ll get another one. If a relationship breaks down, the chances are I might meet someone else…'”

Five years ago Brent met psychotherapist and mental skills coach Jason Brennan in Wellington. He knew Brent’s brother, Mark, who is also a psychotherapist. Brent and Jason started talking and 18 months later came up with the idea for Win: Proven Strategies for Success in Sports, Life and Mental Health, a book that, says Brent, looks “behind the psychology of winning and how the mental skills applied in sports can be adapted for success in everyday life”.
Forty-four-year-old Jason, who has worked as a psychotherapist in Wellington for the past 16 years, (specialising in depression, anxiety, grief and loss, obsessive thinking and acute stress) and who recently moved back to Dublin with his wife and two young children, says: “We talked at great length [to top level sports stars] about what winning is – asking what winning means to them. Often this question challenged the interviewees. We explored what winning really is, in sports, life and business. But especially in what it is in relation to mental health.

“I was fascinated to meet Jason, because I knew he had worked with the All Blacks and because of my own life,” says Brent. “So we decided to do a book on mental health and sports that people, not just sports people, can dip in and out of. Sport is just the launch pad. It is more about how do these people handle depression, anxiety, all those things.”

How does Brent handle, as he calls them, all those things? “I used different techniques. For instance, if I’m having a panic attack, I’ll use meditation to picture myself in the ocean and to get my breathing back,” he says.

The facts of Brent’s successful career – as a broadcaster and rugby pundit on RTE and beyond – do not bear out any of these fears on which his panic attacks feed off his self-esteem – his very soul – like parasites. “That’s the thing about it – it’s irrational,” Brent says.
“The mind can play scenarios out that aren’t real,” says Jason.

Brent says: “Even though I obviously haven’t failed at things, my whole fear is that anything that I set my mind to will be a monumental failure. It is just crippling. It won’t allow you to move forward.

“There are stacks of practical techniques in the book that are taken from sports but are also taken from psychotherapy that overlap,” says Jason. “Take visualization: picturing a different outcome from what the fear is generating in your head.”

Brent says, “When I was a young man in New Zealand, going through extreme low self-confidence and self-worth, I didn’t have the techniques.”
Jason says, “The challenge with the mind is when the fear sets in. It can kick off a whole lot of chemicals in the brain that can get stuck there. That is the fight, flight, freeze.

“And the adrenaline and the cortisone, which make the heart rate go up, make you more anxious and more worried. Eventually that leads to panic attacks, because you could be imagining, ‘I’m going to die’.”

“I made the phone call,” Brent remembers with a laugh, “and I got the ‘no’.”
Win: Proven Strategies for Success in Sports, Life and Mental Health by Brent Pope and Jason Brennan, published by Hachett, price £13.99, is out now 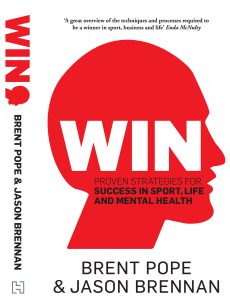